History of the Linda Vista~Annandale Association 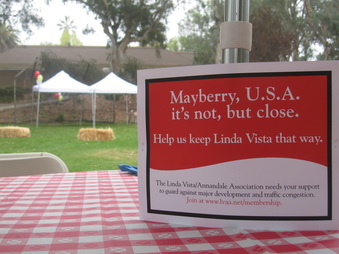 The Linda Vista~Annandale Association (LVAA) is the oldest neighborhood association in Pasadena.  Incorporated in 1930 as an “affiliation of neighbors,” it grew out of the Linda Vista Neighborhood Association, formed in 1924.  In the 1970s, it expanded to include the Annandale community south of Linda Vista.

While the emphasis has varied, the concerns addressed by LVAA have remained constant over the years.  They include protection of the single-family home environment, neighborhood beautification, regulation of hillside development, zoning code enforcement, oversight of the Rose Bowl, and street improvement.

Soon after its founding, LVAA played a leadership role in promoting a bond issue that brought paved streets and sidewalks, sewer laterals, underground utility lines and ornamental lights to the area.

Appropriately, one of the first battles fought by LVAA was to preserve the name of the avenue that runs through the heart of the community.  As described by Beverly Wayte in her excellent book, At The Arroyo’s Edge: A History of Linda Vista:

(In the late 1920s) Flintridge residents announced their intention to have the name of Linda Vista Avenue changed to Flintridge Boulevard. Republican United States Senator Frank P. Flint, Flintridge homeowner and southern California real estate developer, had built the Flintridge Biltmore Hotel on a southern hillside overlooking Linda Vista and Pasadena. The Flintridge townspeople argued to officials that the street leading to the hotel from Pasadena would be more appropriately named after the hotel, but the newly formed Linda Vista Association blocked the change. The hotel complex is now occupied by the Flintridge Sacred Heart Academy.

In 1941, Harold Jurgensen bought the old Tefft market on Linda Vista Avenue from the Newmark family, and a popular tradition started in Linda Vista – Jurgensen’s market [at 1172 Linda Vista Ave.].  At this time, several other businesses were attempting to establish themselves along Linda Vista Avenue, and the Linda Vista~Annandale Association raised approximately $2,000 to combat the commercialization of the area.  Jurgensen was the only person able to obtain a city variance to operate a business on the slopes.

The market closed in 1987; the property is now residential.

Beautification and the prevention of “creeping deterioration” of the neighborhood have always been high on LVAA's agenda, as described in “Linda Vista: Portrait of a Neighborhood,” a pictorial history book published in 1988 by the Linda Vista History Book Committee.  There was the “Adopt-A-Park” landscaping project led by Anne Beall along the east side of Linda Vista Avenue between Linda Vista Bridge and Seco Street.  Tree plantings were done at the traffic islands at Linda Vista and Salvia Canyon.  Four planted urns were installed on Linda Vista Bridge.

LVAA will continue to speak out on issues of neighborhood concern.  In 2004, LVAA played a prominent role in promoting passage of a revised Hillside Ordinance that place stricter limits on the size of new hillside homes.  LVAA will continue its watchdog role on Rose Bowl-related matters, hillside development, zoning enforcement, and traffic, noise and other quality of life issues.